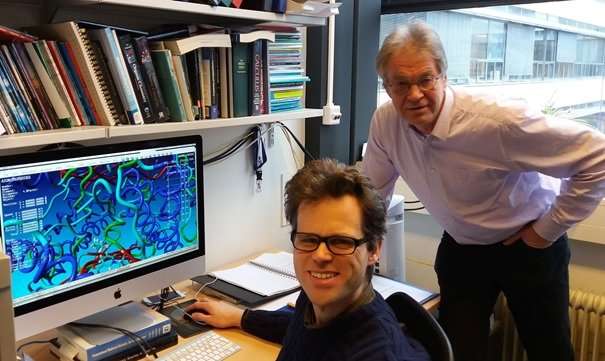 University of Groningen biotechnologists used a computational method to redesign aspartase and convert it to a catalyst for asymmetric hydroamination reactions. Their colleagues in China scaled up the production of this enzyme and managed to produce kilograms of very pure building blocks for pharmaceuticals and other bioactive compounds. This successful proof of principle study was published in Nature Chemical Biology on 21 May.

Enzymes are natural catalysts that work under mild conditions. They are an attractive alternative to uncatalyzed chemical reactions that often require energy-consuming high temperatures or pressure and may generate toxic side products or use solvents. But there is one problem: The range of reactions catalyzed by enzymes is limited. "That's why a lot of effort is being put into modifying natural enzymes," explains Dick Janssen, Professor of Chemical Biotechnology at the Groningen Biomolecular and Biotechnology Institute.

The classic method to modify enzymes is directed evolution, a mutation-selection sequence in the lab that aims to create enzymes with modified catalytic abilities. But it takes a lot of work to make and test hundreds or thousands of enzyme variants in multiple rounds. It would be much more efficient to make a rational design of the required changes based on information on the enzyme's structure and properties.

But even this is complicated, explains Hein Wijma. He is an expert in molecular design software and did most of the computational work in the study. "Proteins are made of 20 different amino acids. So if you want to change an enzyme in four positions, there are 20 options for each of them. That results in a huge matrix of protein structures." Testing them one by one, even on the computer, takes too long. However, a very fast Monte Carlo search algorithm speeds up the discovery of the right outcome by looking for trends in the enzyme's reactivity. 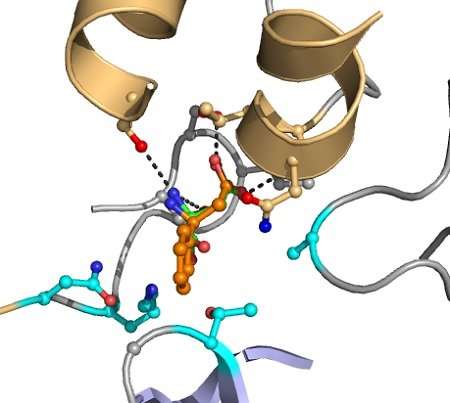 The broken lines indicate interactions between atoms causing catalysis. The target substrate is shown in orange, and the groups indicated in magenta are varied in the computer to discover mutants that improve conversion. Credit: Hein Wijma/University of Groningen

"In the end, it took a couple of days to perform this search in a dedicated computer cluster at the University of Groningen," says Wijma. But a lot of modelling was needed beforehand. "You have to model the reactive centre, the pockets where the substrate binds, and determine the distance between the amino acids and their relative positions and angles." As the group used one enzyme (aspartase) as a starting point for a number of different reactions, the starting point was always the same. This meant they only had to change the target reaction. Wijma: "If we wanted to make a new modification of aspartase, that would probably just take three months now."

The research paper describes four conversions, all additions of ammonium. Aspartase is a deaminase, so the reaction was reversed. "Catalysis goes both ways, so that is not a major problem," says Janssen. For each conversion, the initial selection by the algorithm produced some 100 promising mutants. These were then checked for obvious errors. Janssen: "In the end, some five to 20 mutants were actually made in the lab and tested to see if they functioned as expected."

The next step was to test successful mutant enzymes in a scaled-up setting. "This work was done by a former Ph.D. student and postdoc from our lab, Bian Wu, who is now an assistant professor in China," says Janssen. "He showed which candidates could produce large quantities of the required product." Substrate conversions of 99 percent with a 99 percent enantioselectivity were achieved in quantities up to a kilogram, meaning that the enzymes predicted by the computation methods appear suitable for use in an industrial setting. "This is real proof of principle that our method of in-silico selection of mutants works for producing useful enzymes," concludes Janssen.