Plants are very efficient at turning photons into electrons. But the transport of these electrons is a rather chaotic process, University of Groningen scientists have discovered. They used molecular dynamics to visualize the working of Photosystem II and published their results on 10 May in Nature Communications. Plants and some bacteria use the photosystem II (PSII) complex to convert photons into free electrons which are carried off by the molecule plastoquinone to the next step in a chain. After several steps, these electrons are used to produce the universal energy carrier of the cell, ATP. This is all textbook stuff, and quite a lot is known about the different components in this system. But what was unknown is how plastoquinone enters and leaves the PSII complex to perform its vital task.

‘The structure of PSII was already known. Based on this static structure, it was inferred that there are two channels through which plastoquinone enters and leaves’, explains Siewert-Jan Marrink, professor of Molecular Dynamics at the University of Groningen. ‘But it turns out it isn’t that simple.’ Marrink, his PhD student Floris van Eerden and their colleagues used molecular dynamics to study the interaction of PSII and plastoquinone. This meant modelling the huge PSII complex, which consists of several proteins and other associated molecules, in a huge computer cluster and calculating the interactions of the different parts.

Floris van Eerden did most of the modelling. ‘It took about two years to get everything up and running’, he explains. He didn’t model just the complex, but also the lipid membrane in which it is set as part of the chloroplasts. At first, the results didn’t look promising. ‘PSII is very stable, so it just sits there like a solid block’, says Van Eerden. But by looking in greater detail, a more dynamic picture emerged – the plastoquinone molecules in particular turned out to be very mobile. ‘In its unreduced state, without the extra electrons, plastoquinone did enter the PSII complex and stayed in the “exchange cavity”, where it bound. And after it had picked up electrons, it left this site.’ 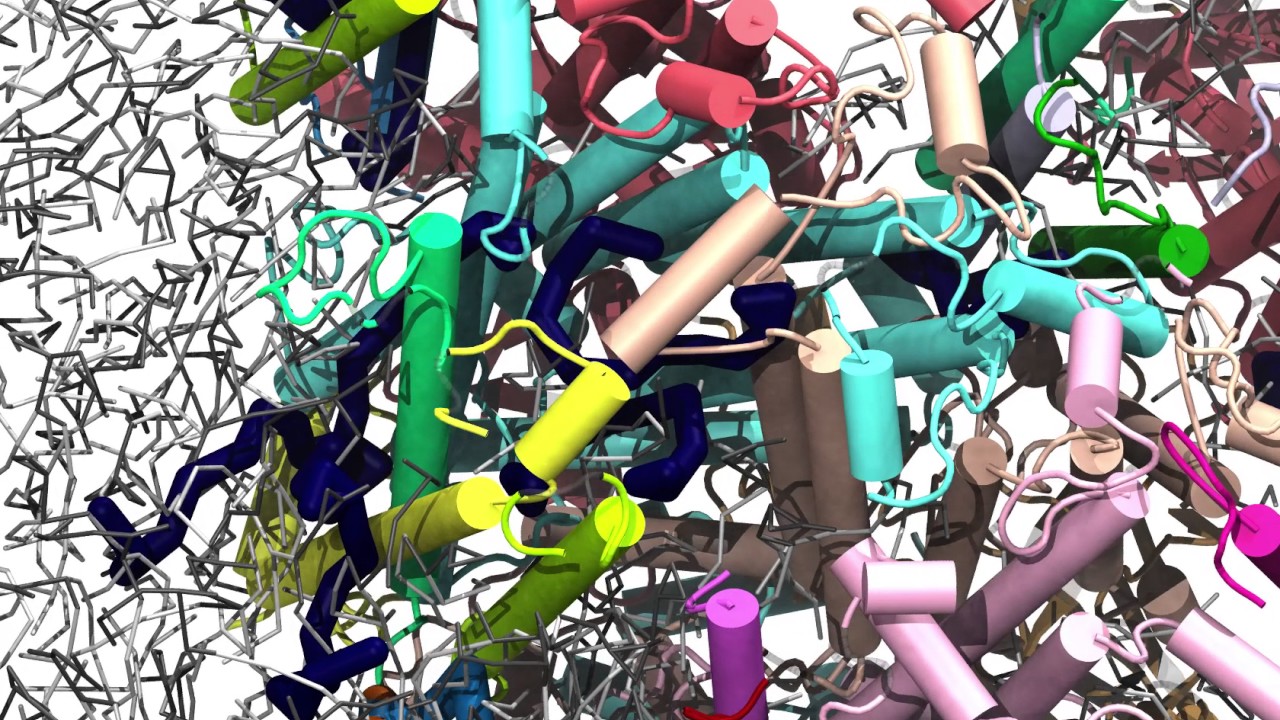 The surprise in this process was the seemingly uncoordinated way in which it happens. ‘The idea in the field was that there were two channels through which plastoquinone could pass – one would be the entrance, the other the exit’, says Marrink. As it turned out, there were three channels which could all be used to enter or leave the complex. ‘Nature turned out to be less orderly than we had assumed.’

Any plastoquinone molecules in the membrane would quickly enter the PSII complex, but might leave it again without electrons, or hover around inside the complex for a while before finally binding in the exchange cavity, where it could accept electrons. Marrink: ‘It is all very much dominated by entropy.’

Still, the entire process of converting a captured photon into an electron, which is then moved through the pipeline to produce the universal cellular energy carrier ATP, is extremely efficient. More so than man-made photovoltaic systems. Perhaps we can learn something from nature. And agriculture might benefit in the long run from the new insights into the working of PSII. ‘Many herbicides act on this system’, says Van Eerden. But overall, it is unraveling a bit of the awe-inspiring complexity of the system that excites the scientists. ‘It is truly amazing’, Marrink exclaims.