New compound allows bacterial communication to be controlled by light

Scientists from the University of Groningen have succeeded in incorporating a light-controlled switch into a molecule used by bacteria for quorum sensing – a process by which bacteria communicate and subsequently control different cellular processes. With the molecule described, it is possible to either inhibit or stimulate communication. This makes it a very useful tool for further research into bacterial communication and its influence on different genetic pathways. The results were published on 15 April in the journal Chem.

In order to respond to their environment, bacteria ‘talk’ to each other through a form of chemical communication called quorum sensing. The cells secrete a signal molecule and at the same time monitor its concentration. As more cells secrete the signal molecule, it can exceed a threshold concentration and activate certain genetic pathways, for example to produce toxins or form a protective biofilm.

The molecule is made up of a head and a flexible carbon-based tail, connected via a β-keto-amide linker. The plan was to incorporate a switch into the tail. ‘This meant we had to connect the modified tail to the head via β-keto-amide linkage. However, the synthetic process to obtain this linkage produces a very unstable intermediate, which made it almost impossible to synthesize the molecule.’

Building on the extensive experience of the synthetic organic chemistry group at the Stratingh Institute of Chemistry at the University of Groningen, the researchers came up with a solution in the form of a new coupling reaction with a stabilized intermediate. Using this intermediate, they were able to synthesize photoswitchable derivatives in a fast and straightforward way. 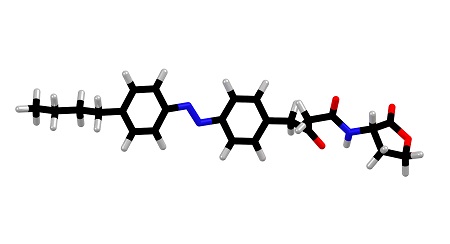 Hansen, together with Master’s student Jacques Hille, produced a ‘library’ of 16 different compounds that had the potential to act as agonists or antagonists of quorum sensing. All were fitted with a light-operated switch. All compounds were based on a molecule that is used in one particular quorum sensing system in Pseudomonas aeruginosa, which has about five of these quorum sensing systems. In collaboration with molecular biologists from the lab of Professor of Molecular Microbiology Arnold Driessen, also at the University of Groningen, the genes for one of these systems were transferred to an E. coli reporter strain, allowing any effect of the newly synthesized compounds to be tested without the interference of other quorum sensing mechanisms.

Bioactivity tests on the compounds obtained showed which parts of the molecule were crucial to controlling quorum sensing. The optimum number of carbon atoms making up the tail appeared to be four. Flipping the switch with light caused the tail to bend. Remarkably, the straight tail had no effect, whereas the bent tail induced the quorum sensing signal. Hansen: ‘Overall, it appears that small changes in the molecule can have a large effect on its activity, but we don’t yet know exactly why.’ 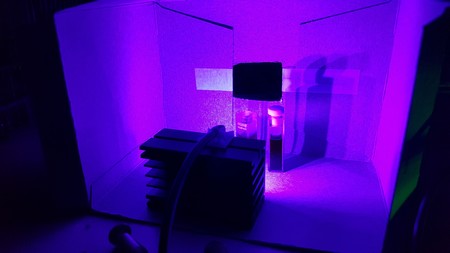 They did find one compound that was able to strongly inhibit the quorum sensing signal and – after irradiation with light, leading to the bending of the tail – to also strongly stimulate it. The difference in activity was more than 700-fold, which is huge. ‘Such a large difference has, to our knowledge, never been shown before for light-switched bioactive molecules.’ This particular molecule will be a very useful tool for investigating how bacteria communicate. ‘In the study, we showed that we could light-control toxin production in a Pseudomonas strain with our switchable modulator. This will be a powerful tool for both clinical and fundamental research into the mechanism of quorum sensing.’

The study was a cooperative effort of microbiologists from the Groningen Biomolecular Sciences and Biotechnology Institute (GBB) and organic chemists at the Stratingh Institute for Chemistry, both part of the Faculty of Science and Engineering at the University of Groningen.